In 1861 the great British war correspondent William Howard Russell, who figures prominently in Our Man in Charleston, was stunned by the level of gun violence in everyday American life (and death).

June 16 — When my work was over I walked out and sat in the shade with a gentleman whose talk turned upon the practices of the Mississippi duello. Without the smallest animus, and in the most natural way in the world, he told us 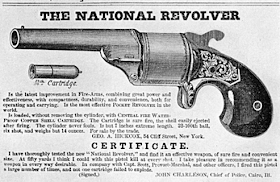 tale after tale of blood, and recounted terrible tragedies enacted outside bars of hotels and in the public streets close beside us. The very air seemed to become purple as he spoke, the land around a veritable "Aceldama." There may, indeed, be security for property, but there is none for the life of its owner in difficulties,who may be shot by a stray bullet from a pistol as he walks up the street.

I learned many valuable facts. I was warned, for example, against the impolicy of trusting to small-bored pistols or to pocket six-shooters in case of a close fight, because suppose you hit your man mortally he may still run in upon you and rip you up with a bowie-knife before he falls dead; whereas if you drive a good heavy bullet into him, or make a hole in him with a "Derringer" ball, he gets faintish and drops at once.

Many illustrations, too, were given of the value of practical lessons of this sort. One particularly struck me. If a gentleman with whom you are engaged in altercation moves his hand towards his breeches pocket, or behind his back, you must smash him or shoot him at once, for he is either going to draw his six-shooter, to pull out a bowie-knife, or to shoot you through the lining of his pocket. The latter practice is considered rather ungentlemanly, but it has somewhat been more honored lately in the observance than in the breach. In fact, the savage practice of walking about with pistols, knives, and poniards, in bar-rooms and gambling-saloons, with passions ungoverned, because there is no law to punish the deeds to which they lead, affords facilities for crime which an uncivilized condition of society leaves too often without punishment, but which must be put down or the country in which it is tolerated will become as barbarous as a jungle inhabited by wild beasts.
Christopher Dickey at 9:23 AM
Share